When the Pharmacist becomes the Patient: My Miscarriage Story

It was a cool morning in November and I had been busy at work all morning. I took an early lunch break to quickly make my 16 week OB checkup and felt annoyed when the appointments were running late. I sat in the waiting room, frantically checking email to see what I missed. Why was I even there? I had two beautiful sons at home, had “passed” the genetic screen a few weeks before, had received the “all clear” after the 12 week appointment, and had announced the pregnancy on social media after our gender reveal. I didn’t drink alcohol, watched my caffeine intake, tried to eat balanced meals… this was just another check box. Go to the 16 week checkup and rush back to work. I finally made it into the exam room and was chatting with my doctor. We continued chatting while she put the fetal Doppler on my stomach to find baby’s heartbeat. After what seemed like forever of her trying to find the heartbeat, I asked her “Should I freak out yet?” She calmly said, “No… I bet he’s just super active and I can’t find him… he just won himself an ultrasound”. It took 30 minutes for me to get the ultrasound. I sat quietly alone in the waiting room, debating if I call my husband. Why should I call and worry him? The doctor told me not to freak out … everything was “probably” fine… it had always been fine before. It was my turn and I slowly made my way onto the ultrasound table. The technician finally announced “OK, I’m going to light up the blood flow now”. I’ll never forget how on the monitor all around the baby lit up, but baby remained dark. I calmly asked, “He’s supposed to light up… isn’t he?”… and all the technician could say was “I’m so sorry”. My world stopped, my heart skipped several beats, and it felt like the walls started closing in. Little did I know that I was now the patient that needed caring for and was no longer the one providing care and answers. I had never appreciated the small touch, the kind words and the need for privacy so much as those first moments. Once I had called my husband, completely broke down and then slightly gathered myself, the technician ushered me through back doors and back hallways to see the doctor again. I’ve never appreciated bypassing a busy, happy OB waiting room more than that moment. The nurse put me in an empty exam room and my doctor rushed in. She too looked devastated and shocked. Her sincerity and honesty struck me. I was now asking questions I had never thought of before… this wasn’t something I had studied or mastered in school… this wasn’t something that anyone talks about. I looked to my doctor to provide guidance and steer me on the best path. Later, when I broke down crying in the parking lot, I’ve never felt so much gratitude to the kind stranger that stopped to see if I needed help. I’m not normally one to hug strangers, but when she asked permission to hug me, I immediately agreed and almost felt relief.

I vaguely remember both the doctor and technician estimating that baby had died three weeks prior to my ultrasound, and since my body had not started to pass him naturally, I had to either be admitted or have a surgical procedure to remove him. After weighing my options, I chose to deliver the baby instead of enduring a procedure. A big factor in this decision was choosing the option that would help the most with my closure. Prior to this experience, I had never asked if my hospital was equipped to handle this type of situation, after all, pregnancy loss isn’t talked about. This was and still is such a taboo topic—even though 1 in 4 pregnancies are lost. I had no idea that my hospital had an entire program that focused just on pregnancy and infant loss. They provided me with a counselor, followed me closely during my hospital admission, and provided much needed emotional support. Small little touches, like putting a red leaf on my hospital door to alert staff that baby was no longer alive, made a long lasting impression. My labor and delivery took a total of 32 long hours and my total hospital stay lasted 5 days. I was continuously amazed at how kind and gentle the hospital staff treated me at every encounter, even when I felt like I was requiring much more care than most. I quickly learned that there wasn’t a script or protocol for pregnancy loss. Everyone’s loss is different, and what works is making decisions that are best for your family and situation. One example of this was whether or not to hold baby after delivery. My hospital counselor shared that she had “never met a mother that regretted holding her baby”. As hard as that moment was… she was right. I’ll never regret holding and admiring baby Connor. To me, he was perfect.

Days, weeks and months have now passed. It was the small gestures from family, friends, and coworkers that carried us through those first few weeks. Cards, meals, keepsakes helped, but looking back—allowing me to say Connor’s name out loud helped the most. As cliché as it sounds, I’ve learned that time does help lessen the pain… but a heart never forgets. I hope that you are never in this situation… but if you are: know that you aren’t alone. 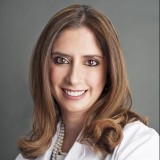 Suzy has 75 publications and has presented at numerous national meetings. She is a Rufus A. Lyman
award recipient which is granted for the best manuscript published in the American Journal of Pharmacy Education. Suzy has served as a medical expert on a number of pharmacy issues and has been a reviewer for Annals of Pharmacotherapy and Currents in Pharmacy Teaching and Learning. She has been quoted in “Crain”, “Chicago Business Magazine” and “Time Out Chicago”. Currently, she is the Chief Academic Officer for the Accreditation Council for Medical Affairs (ACMA). Her areas of interest are assessment and development of medical affairs professionals.

Suzy loves spending time with her husband and children, cooking, baking and eating!! She recently
started working out and is addicted to the “barre”. For years, she struggled between work/life balance and the support from the Pharmacist Moms Group has really helped her. Ultimately finding that balance is something she works on each day. She tries to live by one of her favorite quotes by Rumi: “Live life as if everything is rigged in your favor”